How to Oil Pull

How to Oil Pull and Frequently Asked Questions

Some of the most popular articles that I’ve written that also attract many comments are on Oil pulling. I’ve had great success with oil pulling that you can read here and here, and while I answer many of the questions that I get through comments, I thought it would be worth having an article dedicated to how to oil pull and the many frequently asked questions. So here goes. Scroll down for a great infographic that you can pin or print out and stick on your bathroom mirror!

What type of OIl should I use?

There is no right or wrong answer to this question. Any vegetable oil will work but I personally use and recommend coconut oil as it is antibacterial, antimicrobial and antifungal, but many people use sesame oil, sunflower oil, avocado oil, olive oil and the list goes on.

What does “pulling” mean?

How long should I “pull” for?

The maximum recommended time is 20 minutes. But there’s no hard or fast rule.

If when you first start you find it difficult to pull the oil for a full 20 minutes, then pull for as long as you can and then the next day or time that you try it, add on a bit more time. Eventually you will work up to the full 20 minutes.

How much oil should I use?

You can use anywhere between 1 teaspoon and 1 tablespoon. Remember you will produce saliva which will increase the amount of liquid in your mouth by the end. Start small and work up. 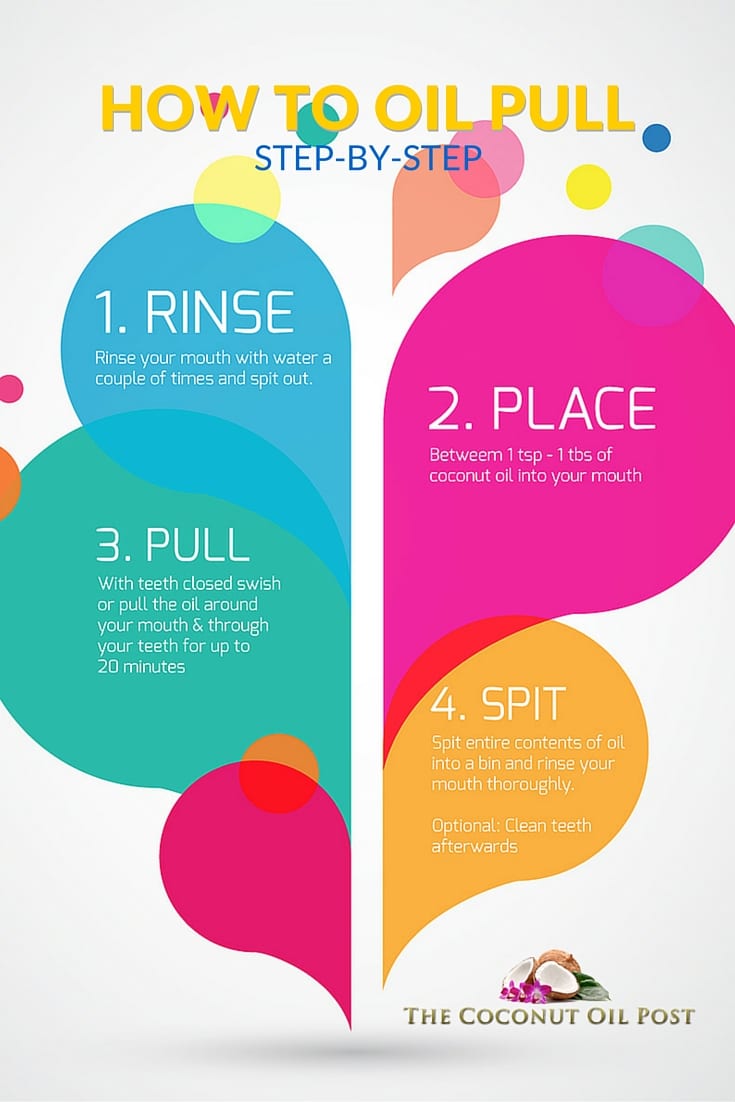 What if I gag?

The gag factor can happen for many reasons. A lot of people can’t come to terms with having a mouthful of oil and some people find it overwhelming to not speak for a full 20 minutes or are scared they won’t be able to breath. So here’s some tips:

The best way to overcome any of these is to start with the smallest amount of oil in your mouth (1 or even 1/2 teaspoon) and pull for the least amount of time before you start to panic or gag say 5 minutes or less. Put a timer on so you can focus on the timer if that helps. The next time you oil pull just add a bit more oil in your mouth and add a bit more time on the clock.

Do I rinse beforehand?

I like to. It’s not a rule, rather a personal preference. If you are oil pulling first thing in the morning it’s good to rinse and have a small drink of water to freshen your mouth but it’s not crucial to the process.

Can I oil pull more than once a day?

Yes you can. Especially if you are experiencing pain in your mouth either from dental problems or infection or you have a health issue that you want to see improve. When I had serious tooth and nerve pain I was oil pulling sometimes up to 3 times a day because each time I did it the pain subsided.

Why do I spit the oil out in the bin?

For starters the oil that you pulled for up to 20 minutes is now full of bacteria and toxins that have been trapped within the oil and the best place for them is in a bin. Not down your sink because the oil will clog your drain and not down your throat because you’ve just swallowed all that hard work and achieved nothing, not to mention you may not feel very well.

What happens if I swallow the oil?

Well you won’t die, but you may not feel very well and you may even vomit it up.

What if I cough, hiccup, sneeze while oil pulling?

I do have personal experience of this. Especially the sneezing and the coughing one. Usually you will know when you are going to cough or sneeze just prior to doing it, so I usually spit the oil out, sneeze or cough and then start over again. The hiccups is probably going to be the same. If you are hiccuping before you start to oil pull, then wait until the episode has finished. If you start hiccuping during, then spit the oil out and start over again after the episode has finished.

When should I brush my teeth?

Personally I brush after I have rinsed my mouth following oil pulling. Some people like to rinse and then eat breakfast and then brush, but I love the feeling of brushing my teeth directly after. No hard or fast rule.

Do I still have to brush my teeth?

Short answer Yes ! – however, there are some testimonies out there of people having so much success with oil pulling that they have found they don’t need to brush as much. Personally I still like to brush my teeth and don’t think that oil pulling is enough – however saying that – it would depend on how young you are, in what state of health you are in and whether you already have tooth decay happening. If there are signs of decay I wouldn’t be giving up teeth brushing just yet.

Do I still need to floss?

Do I still need to have dental appointments?

Yes! You might not need any treatment and you might want to have a really good dentist that you trust is not going to spin you a story. Oil pulling IMO doesn’t replace seeing a dentist at least once a year.

Can I oil pull if I have amalgams, bridges, crowns etc?

Yes, mostly, however, there are 2 schools of thought. Some dentists believe that oil pulling affects the bonding (cement) that is used to fix bridges or crowns in place. While others say that oil pulling won’t affect them in any way, unless you have had a bad dentistry job or your teeth are further decaying underneath, which then the oil pulling has only highlighted what needs to be treated sooner than later. I stopped oil pulling for 6 months when a filling that was very old came loose late last year. I had two of the worst winter throat infections that I’ve had in ages and went back to oil pulling again. The filling hasn’t budged any further and I am due to see my dentist in another 2 weeks to have the tooth looked at.

Yes it will. Clearly not as fast as those little sanders that dentists use in your mouth and possibly do teeth damage at the same time, but yes it will remove plaque. Every so often I will dislodge or have plaque crumble off my teeth which of course can just be spat out.

Tricky question – probably deserves a whole article (coming soon). Oil pulling will aid the prevention of tooth decay but only if your diet is following along the lines of a traditional diet and not the SAD or some other modern western eating pattern. Remove the refined sugars, excess fruit, juices, sodas, floured products and other processed and junk foods and adopt a diet high in fat soluble vitamins, A,D,E & K + proteins + dairy (if tolerated) and vegetables + plus a few of the less sweet fruits (berries, kiwi’s, lemons, limes) and your teeth and overall health will thank you! Read more about tooth decay here.

Will oil pulling remove stains and whiten my teeth?

For some teeth yes for others no. Stains on young teeth and caught early will quite likely be able to be removed. Many people testify of teeth becoming whiter after oil pulling. However, if your teeth have been subjected to an array of illness, poor diet, prescription drugs, smoking, alcohol and antibiotics then you may need to tame your expectations and don’t hold your breath waiting!

Will oil pulling work for everyone?

I don’t believe that there is a “1 size fits all” in any approach when it comes to health. Some people have found oil pulling to be of no benefit to them, but it’s hard to know what they were hoping for to begin with. Others love the feeling of their teeth after they have oil pullied and are satisfied with that and others have had all sorts of ailments healed and health restored all because of oil pulling. Personally it has worked for me and I love the feeling of my teeth after having pulled oil.

How do you know if oil pulling is working?

Oil pulling is a gently form of detoxing and depending on your health status there are a few things you can look out for as indicators or signs of the body purging or dispelling toxins. Sinuses may start to flow and a steady drip or unblocking may occur. Allergies (sneezing, runny eyes, itchiness) slow down, bowels can unclog and hormones can rebalance, so in general you should feel a bit more energy and see signs of clearing in your eyes, your skin, your hair and nails and of course your mouth. Gums tend to look brighter.

So did that help with answering all those questions. Will you try oil pulling or are you already a veteran? Interested in a 30 day challenge? Stay tuned for a post to announce a 30 day challenge to oil pull for all those out there who are just itching to try it but need some support. Digestive and Colon Health in Children

6 Steps to Beautiful Hands and Nails