The Natural Approach To Skin Care

When I first started using Extra Virgin Coconut Oil I was advised to not take it orally as I had quite a high intolerance to salicylates/amines.  As I had very dry and itchy skin and was desperate to find something other than Sorbolene I decided to see how I would fare by using it externally.

Let me sidetrack here and discuss the issue of using sorbolene or for that matter any man-made skin care lotion on your skin.  Your skin is a living, breathing organism that is a doorway to your bloodstream.  There is a well known saying that goes “if you wouldn’t eat it than don’t put it on your skin”.

For as long as I can remember I’ve had itchy and irritated skin.  As a teenager I had severe acne in the form of nodules and cysts which lasted well into my late 20’s.  It lessened as my age went on but my skin constantly felt inflamed and uncomfortable.  I treated this, especially in my 20’s, by treatments with a beautician but after many $$ being spent on skin care products and treatments and no long lasting solution I opted to look again to what was going into my body that might be causing it.

It eased off as I travelled through my 30’s and after my first baby was born at 35 it had virtually disappeared.  However when my daughter was as young as 2 it was evident that her skin was highly sensitive. Labels from clothing had to be removed and there was a limited amount of fabrics that she could tolerate on her skin.  When we started homeschooling she was the happiest as she opted for shorts in summer or a pair of floral jeans in winter and no top or jumper.  However I would constantly be scratching her back or her head to ease the itching.  It wasn’t until she was 8 years old when I discovered the problem and the solution.  I had taken a trip to the doctor for both of us as the itching had resurfaced for me.  I noticed that my face was extremely itchy just after washing my hair and my body would itch uncontrollably just after getting dressed in freshly laundered underwear.

Well the doctor was not of much help although she prompted my thoughts by asking me if I had started using a different washing powder.  I hadn’t – but what I did start thinking about was what was in my washing powder.  My husband’s eldest daughter had serious allergies as a child and after talking with him I decided to investigate the ingredients of washing powder.  At the same time I received a newsletter in the mail from my local health food shop with an article in it on Sodium Laurel Sulfates (SLS).  There I found the problem.  SLS was in everything that I was using.  Shampoo, soaps, washing powders, dishwashing liquids, various cleaners as well as alot of my skin care.

I swapped all my products for more natural alternatives that had no SLS, SLES, Ammonium Laurel Sulfate and Sodium Myreth Sulfate.  I found a few good brands especially for shampoo and washing powders but still couldn’t find a good alternative to body lotion or sorbolene.

That’s where coconut oil comes into it. I started rubbing Extra Virgin Cold Pressed Coconut Oil into my skin.  Within a month my skin was soft and most signs of dryness and irritation had gone.  As the months went on my skin continued to glow more, soften more and feel more nourished and moisturised. Not to mention a simplified skin care routine. Simply rub 2-3 teaspoons of melted coconut oil into your body or try the recipes below.

By using coconut oil for skin care is just that – coconut oil with no added anything?  I love it! 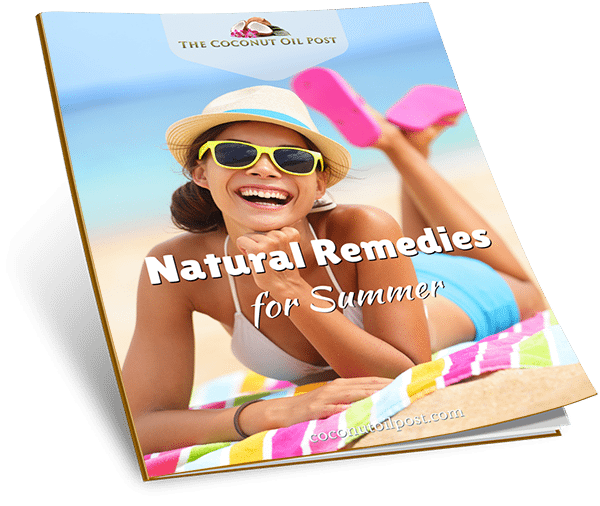 Tried and tested remedies to make the most of summer. From Starting the day, natural sunscreen, foods to heal your gut, recipes and more... Is Coconut Oil The Magic Ingredient to Weight Loss